The UN Security Council is preparing to debate the draft resolution proposed by Moscow for support of the memorandum on creation of de-escalation zones in Syria signed in Astana by Russia, Turkey and Iran. However, there are many pitfalls on the path of implementation of the memorandum signed in Astana, the main of them being unwillingness of a part of the Syrian opposition to join it because it is afraid of future division of the country into the zones of influence among Moscow, Ankara and Tehran.

Representatives of Syrian opposition do not support the peace plan of Russia, Turkey and Iran

The UN Security Council is preparing to debate the draft resolution proposed by Moscow for support of the memorandum on creation of de-escalation zones in Syria signed in Astana by Russia, Turkey and Iran. After the agreement achieved on May 4, the ceasefire regime is observed in Syria as a whole. Trying to work out an efficient formula of the truce, Moscow struggles to make the peace process pass a point of no return and to receive approval of the international community. Another round of inter-Syrian consultations under the UN aegis that opens in Geneva today is dedicated to this task. However, there are many pitfalls on the path of implementation of the memorandum signed in Astana, the main of them being unwillingness of a part of the Syrian opposition to join it because it is afraid of future division of the country into the zones of influence among Moscow, Ankara and Tehran.

Yesterday, President Putin commented on the memorandum on creation of de-escalation zones in Syria in detail for the first time. At a press conference in Beijing according to results of the forum “One belt, one road” he explained, “I expect that this will be an efficient tool, first of all, for preserving of the ceasefire regime. At the current stage, the most important thing is to confirm and strengthen the ceasefire regime and to create conditions for reconciliation and for the follow-up political process on this basis.”

The statement of Putin that directly connected the topic of security zones with the need for soonest re-launch of the political process sounded on the eve of another round of inter-Syrian consultations under the UN aegis opening in Geneva today. Preconditions for continuation of the dialog between Damascus and armed opposition were created by the memorandum on de-escalation zones in Syria signed in Astana.

The first week and a half of existence of security zones geography of which embraced Idlib province, territory to the north of Homs, East Ghouta and southern provinces of Daraa and Quneitra bordering Jordan demonstrated: despite separate breaches the truce regime is observed. Along with this, like in case of the previous agreement on the truce signed at the end of December between the armed opposition and Damascus the new agreements do not mean stopping of struggle of the Syrian governmental forces and Russian Aerospace Forces against the terrorist groups. Creation of de-escalation zones also did not become an obstacle for activity of the antiterrorist coalition in Syria headed by the US.

Against this background a wonderful confession was made by Staffan de Mistura, special envoy of the UN Secretary General for Syria, with mediation of which inter-Syrian consultations took place in Geneva. In an interview to Corriere della Sera newspaper he explained, “The idea is Russia is creation of four security zones, Americans think about two or three temporary zones of “de-escalation” and “stabilization.” Both proposals may finally be compatible.”

In an interview to the First Channel Foreign Minister Sergei Lavrov reported that the memorandum approved in Astana was continuation of the initiative proposed by US President Donald Trump after the inauguration. Taking into account closeness of positions of Moscow and Washington about this issue, Russian authorities expect that the draft resolution for support of the memorandum on de-escalation zones submitted by them to the UN Security Council last week would receive broad international support.

Nonetheless, implementation of the Astana memorandum that is intended for half a year risks encountering several pitfalls. Thus, Foreign Minister of Syria Walid Muallem spoke about ability of the armed opposition to support the truce skeptically and denied the idea of implementation of the mechanism of observers in the de-escalation zones. The Syrian minister warned, “We disagree with the role of UN observers or foreign forces for supervision of observance of the agreement.”

Although precise borders of de-escalation zones have to be determined by the working group of representatives of Russia, Iran and Turkey yet, a part of the armed opposition has distanced itself from the Astana agreements and is not going to observe them. Opponents of the new plan view them as the first step on the path to the future division of Syria into zones of influence among Russia, Turkey and Iran and consider such scenario unacceptable. The opposition supreme committee for negotiations supported by Saudi Arabia refused to sign the memorandum announcing about the threat of dismembering of the country coming from the agreement.

Rejection of the intermediary role of Iran also remains a destabilizing factor. Opponents of Damascus view Iran as a hostile force that struggles not for a truce but for preserving of power of the regime of President Bashar Assad in Syria, as well as strengthening of military presence of Tehran and pro-Iranian Shiite group Hezbollah in the country.

According to Director of the Institute of Religion and Policy Alexander Ignatenko, broadening of the circle of guarantors of the Syrian truce could make the memorandum signed in Syria more viable. In addition to Russia, Iran and Turkey these may be also Saudi Arabia, US and other countries. Ignatenko explained, “For example, troops of Jordan, Egypt and Pakistan could establish control over the de-escalation zones in Syria. As a counterbalance for Iran these countries would be suitable both for the Arabian monarchies and for Russia and Turkey.”

Meanwhile, the question about the role of Turkey is also one of the obstacles on the path of implementation of the memorandum. Deputy Prime Minister of Turkey Veysi Kaynak reported to Hurriet newspaper that it was the Turkish army that was proposed to undertake control over observance of the ceasefire in the de-escalation zone in Idlib province in Astana. Kaynak also spoke about plans of Ankara to create a new military base on the territory of Syria near Al-Bab. Turkey already has a base in Syria in Er-Rai near the border. The statement of Kaynak speaks about plans of Turkish authorities to move far deep into the territory of the neighboring country. Damascus did not comment on the words of Kaynak yet but it would be possible to expect that his reaction would be negative.

Disputes about implementation of the memorandum are also inevitable between Turkey and the US that have different attitude to the Kurdish factor: for Washington Kurds are a well-tested and mot efficient tool for combating of Islamists, for Turkey they are terrorists. On the eve of the visit of President of Turkey Recep Tayyip Erdogan to Washington starting today, the Trump Administration approved supply of heavy kinds of armament to the Kurdish forces fighting against the IS in Syria, which caused an acutely negative reaction of Ankara.

Acting Assistant Secretary of State for the Near East Affairs Stewart Jones announced that taking into account all pitfalls and past failed attempts to establish a truce Washington was skeptical about a possibility of implementation of the agreement on de-escalation zones. At any rate, Moscow, according to Sergei Lavrov, understands that to come to agreement “about such things in principle easier than to implement them in practice, “on the ground” in Syria.” Along with this, the Foreign Minister hopes that in case of success the initiative of security zones “will be spread to the rest on the territory of Syria.”

Moscow and Washington are ready for reconciliation

People’s diplomacy is an alternative to NATO

In the basis of security of the country 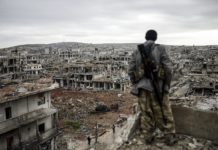