KH-55 missiles were the main caliber of Soviet and afterwards Russian missile-carrying airplanes Tu-160 and Tu-95MS. The missile can fly at an altitude of up to 50 meters at a distance of a few thousand kilometers. KH-55 was made exclusively as a carrier of nuclear warheads.

The main staff of the Aerospace Forces reported that warheads were removed from KH-55 missiles and changes were made in the design. For example, the renovated missiles received special electronic blocks recording signals of radars and air defense missiles. This is especially important for evaluation of efficiency of combat work of air defense crews.

For the first time KH-55 targets were used during the exercises organized at Telemba training range in Transbaikalia at the beginning of April. Air defense missile systems S-300 and S-400 worked out so-called “electronic launches” at the target missiles. An air defense launcher takes a target for tracking, conducts pre-launch preparation but does not launch the missile. After that the system works out all necessary actions for precise killing of the air target.

– KH-55 is not a small target but a normal cruise missile.

This is especially important for combat training of crews of air defense missile systems and fighter pilots. Such products move the military as close to real combat conditions as possible. KH-55 has very high technical and tactical characteristics and it is fairly difficult to down it. But service life of these missiles is expiring now. More modern systems KH-555 and KH-101 have come to replace them. That is why use of KH-55 as targets is a good solution.

KH-55 is the first Soviet series-made cruise missile capable of flying at subsonic speed at super low altitudes. It became a responsible to deployment of cruise missiles Tomahawk (maritime) and ALCM (airborne) by the American armed forces.

Work on KH-55 began back in the middle of 1978. A special carrier airplane was developed for the new missile. This was strategic bomber Tu-95MS. Later, KH-55 was integrated into the armament system of missile-carrying airplane Tu-160.

Cases of suicides grew more frequent in the army

Dome above the Defense ministry

Russia reinforces the fleet in Syria 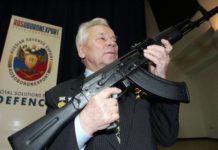